The beginning of a journey and the clumsiness of a legend

Sometimes a game that was made almost 22 years ago has the skill, the ability, to make you feel good. Enjoy it like no other… and sometimes no.

Super Mario 64 DS is a “remake” done for Nintendo DS. Obviously, this version is only 14 years old, but I still remember the days that I saw the first sprites of Super Mario 64. The images came in a VHS, as a promo of a console magazine. In it appeared the first trailer, the first gameplay, and of course, the first movements of Mario in 3D. Woooow, so many good memories.

I clearly remember how it was stunning. In my head all those polygons were just pure fantasy. That feeling of power and freedom was outstanding. When I heard that one of the launch games for Nintendo DS was going to be this game, Super Mario 64 DS, my dream was turning into a reality as I never had the chance of enjoying Super Mario 64 in the original console.

Imagine this: entering in the shop, purchasing a brand new Nintendo DS (thinking that I had lost the stick that came with the console during the first 15 minutes was absolutely great by the way) and with it Super Mario 64 DS, I thought: “well life is good”. What a big mistake.

Let’s start with the fact that you don’t start playing with Mario. Yoshi is the first character that you put your hands on. Believe me, even though I usually sacrifice Yoshi for the fact of going faster, this doesn’t mean that I have any kind of ill will against him, totally the opposite, but if I buy a Mario game, I want him to be the first character I play with.

The controls are so clunky, specially the camera. Obviously, this game was not designed to be played this way. The original camera, even though it wasn’t that good either, is 20 million times more effective. The way that the characters move is precise, feels natural but that small problem with the camera ruins what could be an amazing experience: playing Mario 64 on the go.

Something positive I would say is the idea of using more characters. Yes, using Yoshi, Luigi and Wario is a blast, and the idea of using their special skills for getting some extra stars is top notch, but that is the only addition that can be considered relevant and important.

The number of stars that you can get are 150, against the 120 that you can find in the original one, and also some minigames that you will unlock while you are playing. Don’t get me wrong, I have enjoyed playing the game a lot, it was fast, funny and entertaining, but What Mario game isn’t, right?

All these “reviews” are going to be written basically with the idea that we don’t care about how good or bad a game looks, or how it sounds. It is all about the gameplay and the feelings that we get while playing them. Nostalgia is a good friend and, in this case, even though the game is not bad, I’d rather keep those memories of me drooling in front of a tv with Mario 64 back in 1996 than remembering all the times that I died because the camera was so trolly. 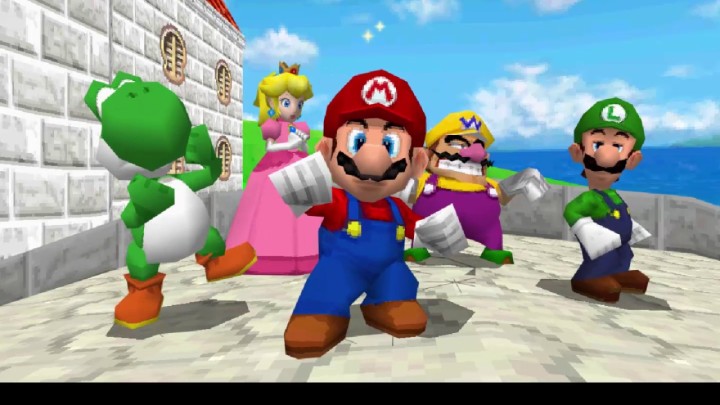 Thanks for reading, and I hope you enjoyed our first review for DSaster. See you around guys.